Leadership Training for a High-Performance Team

In mid-September last year, our CEO – Pedro gave me a massive challenge: organize a Leadership training for a High-Performance Team! This sounds complex but let me explain the thought process behind it and what I have learned along the way.

My first step was to make sure that everyone was on board with the idea. For this, I conducted a survey to better understand what their training areas of interest, expectations and what schedule were would be better for them. At the same time, we were all concerned about the amount of time that we would need to allocate to this training, without harming our daily work schedule.

Based on the survey answers, we split our team in 2 groups. Each group had sessions every 3 weeks, 2.30-hour long. The good practices say that training sessions should be held in the morning because there is a tendency towards a greater predisposition of the trainees. On top of that, these sessions should be closely monitored and announced as much as possible overtime.

Another important aspect of this training was the person who was guiding these sessions. We wanted someone who was inspiring and trustworthy. As soon as we started to talk with Coach Luís Silva we knew he was the man for the job! 😊

In the mentioned survey, I could understand that many of them wanted to improve their communications skills, team building, leadership and, not surprisingly, many would like to lead teams in the near future (and we love that aspiration!).

So, the first and most anticipated topic was… [insert drum roll here] – Communication!

Communication is the basis of any relationship and a cornerstone of a high-performance team. So, we started to approach the Communications barriers, which for us automatically means toxins and antidotes. We learned that there are 4 defined toxins patterns:

For each one of these toxins we have the so-called Antidotes. In other words, ways of ease the situation by replacing these toxins with more constructive and healthy behaviours. Let me give you a few examples:

It’s easy to fall in a situation where we criticize someone’s character or complaining about a failed behaviour rather than attacking their argument. Attacking someone with the famous “what’s wrong with you” is fairly common… For this toxin, we choose to address the behaviour and not attack the person. So, start the conversation in a gentle but assertive way, and talk about what those actions made you feel (and try to use more “I feel… I want…” statements).

No one likes to be criticized… but we are in position to choose how we react to it. Defensiveness is protecting yourself from criticism, exposure of your shortcomings, or other real or perceived threats to the ego. The problem with defensiveness is that its perceived effect is blame. It’s like saying: “The problem is not me, it’s you.” That’s why it is so important to have an active listening and believe in the 2% rule. And what’s this rule? We all should treat any complaint as if 2% of it were true.

We all have been in a situation where you are debating something with a teammate, and he is rolling his eyes… I’m sure this also made you feel neglected and insignificant. It’s crucial to understand the impact of Contempt, because this is the most poisonous of all toxins – it destroys psychological, emotional, and physical health. The antidote for this toxin should start from the beginning of any relationship. How? By building a culture of appreciation and respect in your team. If you regularly express appreciation and respect for your teammate, you’ll create a positive perspective in your team that acts as a buffer for negative feelings. The more positive you feel, the less likely that you’ll feel or express contempt.

Cutting off all sorts of communication, silent treatments, refusals to engage or withdrawal. Do you recognize these behaviours? Unfortunately, they are common. To this toxin, the most valuable antidote is transparency and respect. Be honest if something made you feel blamed or criticized. And if you are seeing someone in your team having this behaviour, intervene. You can be the mediator of this situation and ultimately help your team have a better relationship!

You will fail, be aware of that

Something that we´ve learned along this training is that no one is perfect, and at some point, we all use toxins to justify our behaviour. If we assume this by default, it will be easier to apply the antidotes whenever any of these toxins appear in a work or personal situation. And we saw it happen pretty quickly.

A few days after this session, at lunch, someone spoke more sharply, although it wasn’t with bad intentions. However, it was interesting how quickly we remember the antidotes for that action. Not only we addressed it lightly, but we ended laughing of the way we handled the situation and just applied what we had learned.

Empathy is not sympathy

The next topic in our learning program was empathy. And I must confess… I realized that empathy isn’t sympathy. Yes, it’s true! Empathy is recognizing emotions in others, not judging. It’s having the capability to put yourself in others’ shoes.

Did you know that empathy can be communicated verbally and non-verbally? Non-verbal empathy occurs 65% more than verbal empathy. We need to be aware that when we speak to someone, our posture and gestures also “speaks” and shows how empathetic (or not) we are.

What is your Team Culture?

One of the most interesting sessions was to reflect on the type of team we are and what we should do to reach that high-performance team status. There are 4 types of team culture based on Positivity and Productivity: 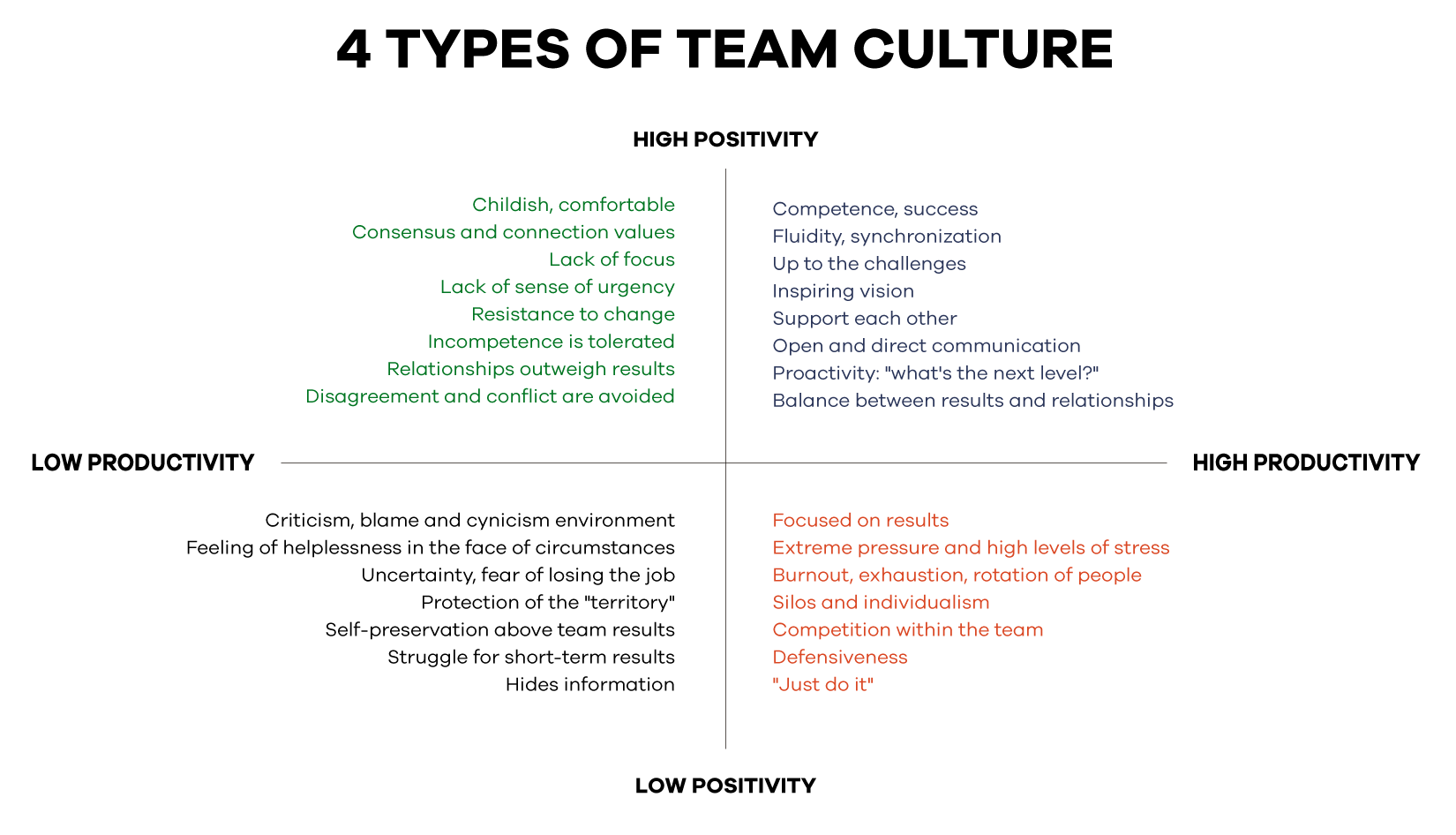 At the beginning of this exercise, each of us had to choose which quadrant best suited our team. Then choose where we would like to be in the long run. This allowed us to reflect on the team’s dynamics, productivity, and the way we face our day-to-day work lives.

I’m proud to say that most of us had positioned in the high positivity and productivity quadrant. However, let’s be honest, we are human, and any team have their ups and downs. This dynamic session was one of my favourites and my teammates too!

I’m curious … What quadrant are you or your team in?

We are all coaches of each other

I must admit… it’s not as easy as it might look. Why? Because acting like a Coach requires the ability to not judge, always ask open questions and never give suggestions or advice. It was pretty hard! Coach Luís gave us a script to help (including using SMART actions), but still… HARD! 😀

Conversation alignment. Typically, these conversations occur in situations of conflict or blockade between peers. Nothing better to train the conversations than a good improvisation. So, we had 3 different scenarios, and the goal is for everyone pass through the position of mediator. I felt like an actress and I nervously laughed because it is very difficult to solve conflicts between different people, with different perspectives without judging or giving suggestions. And possibility of not reaching a consensus was unsettling.

But at the end, we all laughed, especially when I wasn’t the moderator of the conversation – the person who tries to get everyone in line! As you can see, these are the skills that any future leader needs to develop.

And let me add something – these exercises taught us that we all benefit from having these skills. At any point in time, when we see a teammate in distress or in conflict, we can intervene the right way and be the help in need 😊

The training started in October 2019 and ended in March 2020. Woow! I’m proud of my team’s dedication and commitment to this training, and the overall feedback was fantastic!

Personally, I must confess that this training really opened my horizons and offered greater clarity on some topics that we already knew, but for which we have become more aware.

We learned strategies on how to deal with problems and challenges that appear in our daily lives. Interestingly, the feedback that I received, is that what we learned in training, has been mostly applied in personal life.

I also learned that we can all act and mediate problems/conflicts. We have that right and duty as a team member. After this beautiful training, today I believe that we are much closer as a team and, ultimately, happier.

Finally, I’m honored to say that we are indeed a High Performance and High Positivity Team. What about your team? Share your experience with us!

A curious woman who by coincidence ended up working in the HR. Perhaps my communication skills have spoken for me. :) I'm fascinated by the tech world and all its "superpowers". Dance is one of my passions and freedom is the trigger for being happy.

What is a Salesforce developer?

Our guide to growth hacking

This website uses cookies to improve your experience while you navigate through the website. Out of these, the cookies that are categorized as necessary are stored on your browser as they are essential for the working of basic functionalities of the website. We also use third-party cookies that help us analyze and understand how you use this website. These cookies will be stored in your browser only with your consent. You also have the option to opt-out of these cookies. But opting out of some of these cookies may affect your browsing experience.
Necessary Always Enabled

Any cookies that may not be particularly necessary for the website to function and is used specifically to collect user personal data via analytics, ads, other embedded contents are termed as non-necessary cookies. It is mandatory to procure user consent prior to running these cookies on your website.