How expensive is tech debt?

A small part of a business’ tech debt is inevitable, but what about the rest?
This is how expensive tech debt really is.

Tech debt or technical debt refers to the cost of having to rework faulty or poor-quality software. It is expensive, demotivating, grinding work. It is also, for the most part, avoidable.

With software upgrades and the natural evolution of legacy systems, there’s always going to be the need to revisit and rewrite code or software. Some technical debt is, in fact, unavoidable, but this kind of tech debt isn’t the burden we’re talking about.

Let’s make a parallel with becoming a homeowner. Becoming a homeowner is exciting and saves money in the long run, compared to renting. However, the expenses of owning a house do not end when the house is paid off. In fact, they never end. Houses need maintenance and upkeep every few years, forever. Be it replacing the caulking around windows and doors to keep your home insulated, sealing the grout in bathrooms and kitchens to ensure no water infiltrations, there are inevitable costs. The same goes for software developing and tech debt.

However, there are other expenses associated with a house that are not part of normal upkeep. We’re talking, mainly, fixing the “shortcuts” taken when building the house. These include things like replacing bad quality windows, upgrading boilers, fixing structural insulation issues, or others that normally result from a “fast” or “cheap” job. While these decisions may help cut corners and get software to market faster, they often end up costing more overall.

Tech debt, just like any kind of debt, increases over time–call it interest. And, just like any other debt, it indirectly affects other departments and areas of your business.

According to a report by Stripe, engineers spend on average 33% of their working hours dealing with technical debt, while 9% dealing with bad code (meaning errors and debugging). That means one third of their pay is being “used” on fixing mistakes. Besides the cost in salaries, tech debt keeps engineers from achieving its full potential, and depletes motivation. 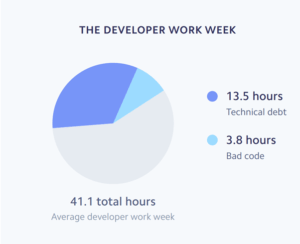 What normally happens when there is a lot of tech debt is that companies choose to allocate a team to perform maintenance. Instead, they should focus on getting rid of tech debt backlog as much as possible and keep from generating even more. But the decision to put maintenance over addressing tech debt’s root cause comes with a cost. Do you know how much a dream team costs?

There is also the case of your current team not being able to deal with the problems that caused, or are causing, tech debt. Often this leads to bugs that QA staff doesn’t detect in time but are spotted by the users, your customers, themselves. So, you will have increased support costs, be it customer support, or emergency backend support to fix the bug(s) quickly.

While this isn’t the case for all businesses, tech debt can cause legal costs – fines, compliance penalties or even lawsuits. And when this happens, the consequences can seriously harm a business. When software is riddled with tech debt, for example, issues that need updating or changing. And the longer it takes to apply changes, the deeper developers will need to dig to improve poorly written code and fix “quick fixes”. Which, in turn, increases the chances of non-compliance.

Around 66% of engineers believe their team would be up to 100% faster if there was a process in place for dealing with technical debt. Tech debt can delay the launch of stable releases, causing your product to become obsolete in the market. Even in a “best-case scenario”, a delay of just a couple months in shipping can have important effects on revenue. 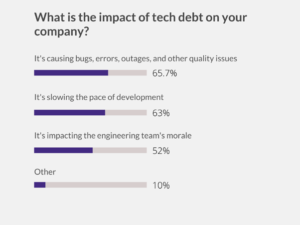 Do you know how enterprise-grade low-code can speed up time-to-market?

Imagine this: your business’ budget has to allocate resources (monetary, human, or both) to tech debt, meaning there is a lower budget for other activities–these will have to wait. If you choose to put technical debt in the back burner, to allow your team to focus on other matters, then you’re increasing your tech debt.

Does anyone enjoy having to fix things to work on something? According to a 2021 study, 52% of engineers say that tech debt negatively impacts their team’s morale. This means less productivity, less efficiency, and a genuine possibility of losing talent, as unhappy engineers and developers will most likely look for more exciting work opportunities.

When there is a considerable amount of technical debt, the first step is to, well, deal with it. This means you need to allocate resources to technical debt– a team. Second, you need a process in place to help you avoid future technical debt. This can quickly become overwhelming for businesses of all sizes. Teams might not have enough capacity to deal with it and still put in work in the rest, or not have the skills to revisit copious amount of faulty code or complicated legacy systems. Ever considered an extended team?

At Near Partner, we’re a growing team of developers with several areas of expertise, and we’re ready to collaborate with you and get the best solutions for your business. Still unsure about what route to take. Let us help you find the right path for your company and create a solid strategy for dealing with tech debt: get in touch!

CSS latest version: what to look for in 2022