7 best Backend Frameworks for developers in 2022

From the most popular to the latest additions, these are the 7 best backend
frameworks for developers in 2022.

Fast, secure, robust, and intuitive. These are the 7 best backend frameworks available to developers today. Here it goes:

What is a Backend framework?

Web development can be divided into frontend and backend development, also called user-side and server-side development, respectively. This means that the frontend part interacts with the user, while the backend part deals with the inner functioning of a web application or website. Ultimately, a web app or website needs both to work properly. 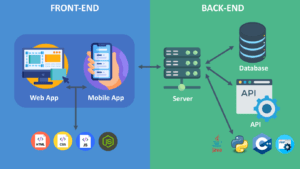 This tool or platform is used to build the server-side of a web application and comes equipped with libraries, toolboxes, methods, and ready-made components of server-side programming languages. While working on a backend framework, a developer will focus on servers, databases, how they connect and communicate, and how the information and structures on the server-side interact with the user-side.

The best frontend frameworks in 2022 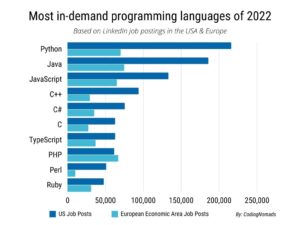 Most in demand programming languages of 2022. Source: Coding Nomads

ASP.NET Core is the successor of ASP.NET. It is an open-source, cross-platform (platform-independent) framework used to build web applications in .NET. Regarded as one of the best backend frameworks in terms of performance, ASP.NET Core is based on the MVC framework, has robust Cloud support, and supports modular architecture exceptionally well. It runs on Windows, Mac, or Linux operating systems.

ASP.NET Core allows developers to build modern, cloud-optimized, and mobile backend applications. Applications created with this backend framework can either be deployed on the cloud or run on premises.

Go Agile: see the differences between Scrum and Kanban.

Spring Framework is one of the best backend frameworks for the evergreen language Java. First released in 2002, it boasts plenty of handy functionalities like caching, transaction management, configuration management, monitoring, or security.

Spring Framework allows devs to create high performance and reusable code, and any kind of Java application. It is also a lightweight framework, making it one of the best backend frameworks around, especially for Java.

Django is a high-level framework for the programming language Python. It is one of the best backend frameworks because, just like Python, it has an extensive community and documentation, all the while being highly scalable, customizable, and equipped with pretty much anything a developer could need. Also, there is a wide range of third-party plug-ins available.

The Django framework focuses on code reusing, based on the Don’t-Repeat-Yourself principle, which enhances development speed. It is a very secure backend framework, ideal for large-scale and database-driven web applications. In case of small projects, be aware since Django could make that small project too stuffed with needless characteristics.

Some big websites created with Django include Mozilla, Pinterest, National Geographic, and Disqus.

Flask is a popular backend framework written in Python. It is considered a micro web framework because it does not need to use functions from third-party libraries. Flask runs on the web server, making it fast and effective, especially to build smaller applications. It’s a simple, highly flexible, and high-performing backend framework, easier to use than Django, and also easier to learn as it requires less  code to create a simple web application.

Netflix, LinkedIn, Lyft, and Airbnb are some companies that use Flask in their modern web applications. Flask is based on Unicode.

Rails, also called Ruby on Rails, is a free and open-source server-side web application framework, loaded with structures for databases, web services, and web pages. It is a beginner-friendly backend framework that combines Ruby, JavaScript, CSS, and HTML to develop dynamic applications.

Ruby generates code that is compact, elegant, and powerful, and both Ruby and Rails are easy to understand and learn, as well as easy to test and compile. This is one of the best backend frameworks to create prototypes and Minimum Viable Products (MVPs), fast. Some of the giants that use Ruby on Rails include Netflix, Hulu, Shopify, GitHub, or Zendesk.

Extensions and packages are called gems in Ruby. Gem is a library or a packaged reusable collection of code. It can be large or small, but it is usually organized by some specific goal it allows you to accomplish. Gems can use other gems to create a more complex gem.

Express.js is an open-source and free backend framework. Designed for web applications, websites, and APIs, it is the de facto standard server framework for Node.js an Express.js, with which developers can create single-page, multi-page, or hybrid applications. Since JavaScript is the most popular web development language and provides full-stack development, learning Express.js is a smart choice for programmers. Companies like Twitter, Intuit, Trustpilot, and BlaBlaCar. use Express.js in their tech stacks.

Laravel is an open-source web framework, written in PHP, one of the most used backend programming languages. It is a beginner-friendly framework with an intuitive interface packed with an advanced toolbox, ideal for building modern and secure web applications.

Its syntax is expressive and elegant, and the framework has excellent exception and error handling, allowing web developers to create flexible and creative applications, while taking care of the background details. Some of the companies using Laravel in their tech stack are 9GAG, Wisesight, Kmong, and Razorpay.

Do you know the difference between traditional and no-code development?

Looking for a Backend Partner?

Time to build a new web app. Do you need an extended team to assist your in-house team? At Near Partner, we know there is no one size-fits-all solution, and each business’ needs are different. Choosing the right partner is essential. Luckily, our experienced developers can lend a hand not only in building your app but also choosing the right backend framework to work with, depending on what your vision is. Come brainstorm with us.

See which of our Nearshore Solutions fits what you have in mind for your company, or just drop us a line if you are unsure about your business’ specific development needs. Get in touch with Near Partner and get your website or app up and running.

I have been a developer for longer than I can remember (well... maybe not). Does that sum up everything about me? I love tech, but I’m also a husband and a father, I love to learn new stuff and experiment with life."Hack hard and prosper!" has been my latest motto. Take good care of yourself and the rest will follow…

Salesforce eCommerce 101: everything you need to know