The time to build an app has come. What’s the best approach?
Get your answers to the question of low-code vs traditional development.

There are essentially two ways to go building software or apps. But what’s the kicker? Both approaches have pros and cons, depending on what you want and your business needs. You might think app development is app development, right? You’re absolutely right, but do you know which kind is right for you? That’s what the question of low-code vs traditional development is all about.

With Low-code developers can build applications via a drag-and-drop visual interface. The modules are pre-maid and, by default, communicate with each other. 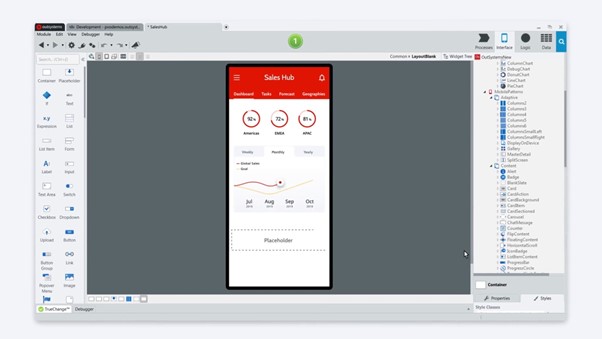 Does that mean that low-code requires no coding at all? Not really. On a first glance, yes, you can build your whole app without needing to do so much in terms of manual programming. However, there might be some tweaking or fine-tuning required, and this will require some coding.

CIO’s often wonder about the practical aspects of low-code vs traditional development.
These are the fundamental questions that need answering.

1. Which has the shortest time-to-market?

One of the top pros of low-code is that it is fast. And we mean, fast. Comparing low-code vs traditional development in terms of time to market is something like days or weeks vs. months. Read more on how enterprise-grade low-code can speed up time-to-market.

2. Which has the most compatibility options?

Low-code platforms are inherently multi-device compatible. The apps created in low-code platforms can then run on all core platforms, such as web, mobile and cloud, and on all devices. Traditional development requires the app to be developed separately for each platform.

3. Which generates the least tech debt?

Technical debt is basically the time and money a company needs to apply to software upgrades, releases of newer versions of programming languages, company expansions, outdated legacy systems, or even low-quality code, bugs, and errors.

Low-code is less prone to generate technical debt, since the modules are pre-coded and designed to fit in with each other. Custom dev, however, can generate more tech debt since all the maintenance is up to the actual developers.

4. Which is more scalable?

Scalability is the ability of an app to handle a growing number of customers, clients, or users. It guarantees that, over time, the app can sustain the growth of its user base. Low-code and cloud-native app development make scalability much easier. Of course, a traditionally developed app, be it web or mobile, can also be scaled, but this is a much more complex process.

There is some investment to be made with both methods, and it also depends on what you look for. To build low-code-based apps you’ll need a low-code platform for the graphic interface, where you then can build apps in a drag-and-drop fashion. This platform usually comes with a fee. While traditional development does not require such a platform, it does usually take longer, making such projects more expensive from the getgo. Also, since custom development is more error-prone, delays and hidden costs are frequent.

6. Which is the most intuitive option?

Low-code vs Traditional Development: the takeaways

So, to wrap up the question of low-code vs traditional development, we summed the differences between them.

While low-code development allows citizen development and speeds up time-to-market in up to 10x, it requires a platform. It is generally cloud-based, meaning this platform is maintained externally, and that includes all upgrades, security patches, etc, that your team does not need to worry about. Customization in low-code requires actual coding by actual developers. Since companies build low-code apps through a platform, there is, most of the time, vendor lock-in.

Traditional custom development is a job for software developers only and requires specific hard skills that a citizen developer does not have. That being said, custom dev takes time, and depending on what you and your business need, a lot of time. As a big pro, you have total control over your software, but also responsibility over updates, enhancement, and growth (because, how they say, with great power…). This means you can customize software and have complete ownership and rights to it.

Lowcode vs. Traditional Development: which is best?

But wait, are you still unsure? If the whole low-code vs traditional development thing is still running through your thoughts and you’re uncertain about which to choose for your app, for your company and for your budget, give us a shout!

Does your project need a partner?

At Near Partner, we are a team of experienced developers, fluent in both custom software development and low-code development, who have extensive experience in helping our customers decide which is the best development approach for their projects, taking budgets, company structure, teams, and proof of concept into account. And we are eager to help with your business too. Get in touch!

The state of Nearshore