What is Web3: the buzz behind the buzzwords

Web3 is the new stage of the internet, carried by blockchain, and promising decentralisation, accessibility, and transparency.
But what else is in a name?

If you keep an ear out for Silicon Valley jargon, Web3 may not be an alien concept to you. But what does it mean exactly, and how does it impact real life?

The keyword for Web 1.0 is “read-only.” Web 1.0 was the first iteration of the web, which lasted from the early 90s to the 2000s. It comprised websites with static content that offered little interactivity, but displayed information in text or image format. In Web 1.0, applications were proprietary: users could download and use them, but they lacked have access to the source code. Take a trip down memory lane and check CERN’s website, a true landmark and the very first of its kind.

The early 2000s brought along Web 2.0, the read-write web, or Social Web, which is the one we still largely use right now. This is a participatory web dedicated to user-generated content. Facebook, Twitter, Tumblr, even Myspace back in the day, are all examples of Web 2.0 applications. Web 2.0’s websites run on dynamic HTML, and most applications are open source. An example is Firefox, where users can create their own applications and add-ons.

Finally, Web3. Still to fully take its hold in the digital world, the third generation of the web, or read-write-execute web has decentralisation at its core. This means data is not stored in servers but on the network itself. Users can share information directly with other users, rather than going through the user-server-user traditional path. Being based on blockchain technology and AI, any change, access, or movement of that data is recorded on the blockchain, in principle making for a more transparent internet, and preventing misuse of data.

THE EVOLUTION OF THE WEB 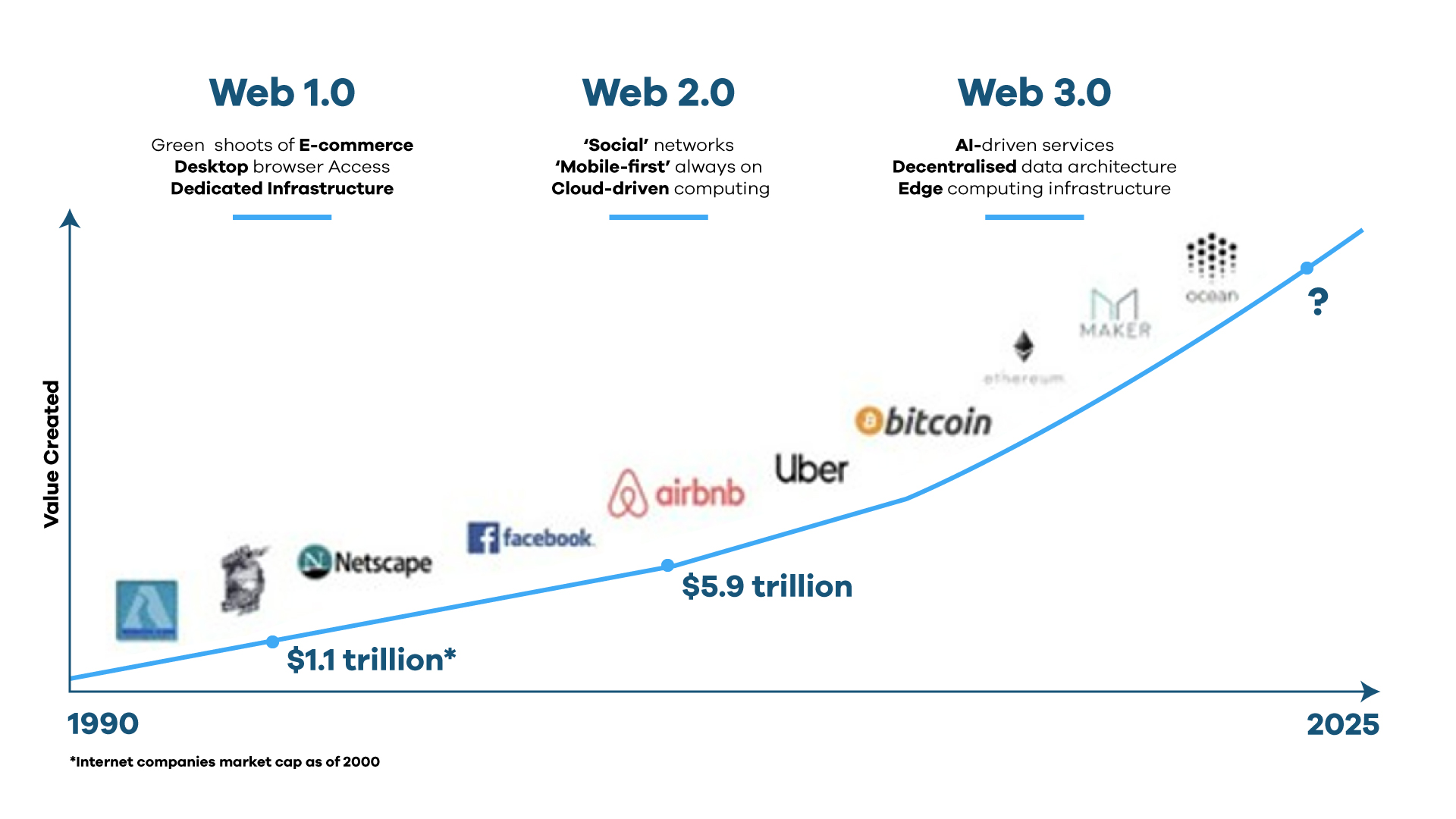 However, there’s more. Web3 is open in the sense that networks would be built from open-source software, and by a community of developers. Another critical feature is that no institution mediates interactions between users, but by the users themselves. And finally, everyone can take part with no authorisation by a governing third party.

Since web3 is based on blockchain and artificial intelligence, it is inevitably intertwined with a series of other buzzwords, like cryptocurrency, NFTs, metaverse, Dapps, and more.

The concepts associated with Web3 are equally important to understand how it works and its basic principles.

Non-Fungible Tokens (NFTs) are cryptographic tokens, or non-interchangeable units of data stored on a blockchain, that can be sold and traded. NFTs provide a public certificate of authenticity or proof of ownership to digital files such as photos, videos, or audio. An NFT is a 40-digit string of words and numbers that holds information pertaining to the file. For example, for a piece of digital art, the NFT contains information of the original artist, the current (and only) owner of the item, and the current price of the item.

A decentralized autonomous organisation (DAO) is an organisation with a flat hierarchy, governed by its users and without a central leader (or company) dictating decisions. DAOs are built on a blockchain using smart contracts.

A smart contract is an agreement between two parties written as a computer program or code. Smart contracts run on the blockchain – they are stored and processed on a public database and can be sent without a third party. Smart contracts are not controlled by the user, but deployed by the network itself, and cannot be changed. If smart contracts follow the same rules as a contract, they are legally binding.

Cryptocurrency is a digital or virtual currency that uses cryptography to secure transactions. Cryptocurrencies rarely have a central regulating authority. Instead, cryptocurrencies use decentralised systems to record transactions and issue new units. Popular examples include Bitcoin or Ethereum.

The metaverse is often described as a set of online spaces where people can work, socialize, and exist as avatars. In short, a virtual world that parallels our reality. If Second Life, the social and gaming platform came to mind, yes, that is exactly it. However, the metaverse is also evolving, hand in hand with VR and AR. By some estimates, the Metaverse will soon encompass gaming, telepresence, and social media.

Decentralised Finance, or DeFi, is an open and global emerging financial technology that defies the traditional financial systems. The banking system is one of the best examples of centralisation: banks hold your money, charge you money for it, make money out of it; then, there are the third parties that facilitate transactions and charge a fee for it. Merchants, of course, are charged to receive money, and buyers are charged to pay money. It’s an endless cycle. Well, DeFi is the opposite. It eliminates intermediaries by enabling individuals to use financial services through emerging technologies, independently of who or where they are.

Dapps are decentralised apps. They’re just like normal apps but built and run on the blockchain or another peer-to-peer network. This makes them difficult to control by any single authority, such as a government, which means they are censorship-resistant Dapps are also open-source, they operate on its own, use a cryptographic token to keep the network secure, and have all the data and records public.

Is Web3 for everyone?

While Web3 and its principles are very attractive, a deeper look reveals lingering issues and downsides. Web3 has many critics, including high-sounding names such as Elon Musk. One frequent criticism is that it is not really decentralised but centralised somewhere else, by other companies that aren’t the usual Tech Giants. There are also compliance issues: how does GDPR work in a system that does not forget such as the blockchain?

NFTs, on the other hand, raise questions due to their volatility and speculative nature, just like cryptocurrency. Smart contracts, DeFi, and DAOs pose new challenges in detecting and avoiding fraudulent activity or scams, given there is no regulating authority–like a government.

However, there are also very outspoken supporters of Web3, one being Ethereum co-founder Gavin Wood. Understandably, the promise of a more democratic content creation, control over privacy, improved security, and tamper-proof networks, is exciting and bound to excite a large following.

Overall, Web3 is still a work in progress, and opinions are frequently divided. Crypto enthusiasts see its potential of Web3 above anything else, while more sceptical eyes focus on the flaws and hypothetical scenarios.

If the Web3 has been on your mind and you want to prepare for the changes that are to come, get in touch with us at Near Partner! We can help your organisation define a Web3 strategy and help make it come true. Write us a message with your thoughts and find out how we can help you get started, adapt, and breeze through the evolution of internet.

Coming of age: what is legacy modernisation?