Choosing a frontend framework can be a full-blown headache, and we know it.
So lay back, relax, and let us make a side-by-side comparison of React vs. Angular.

React and Angular are popular frontend resources that have plenty in common. Both are products of tech giants widely used for web app development. The more popular they become, the more the question seems to pop up: what’s the right choice in React vs. Angular? Join in and let’s look at React vs. Angular a bit more in-depth.

React is an open-source JavaScript library developed in 2013 by Facebook. It is mostly used to create User Interfaces (UI) but can also be deployed to create single-page apps for web or mobile. In that case, React needs to be used along other supporting tools, like containers, routers, code bundlers, state-management software, and testing tools.

Angular is an open-source platform and web application framework developed in 2016 by Google. Angular allows to create single-page applications using TypeScript and HTML, with no additional libraries or tools. 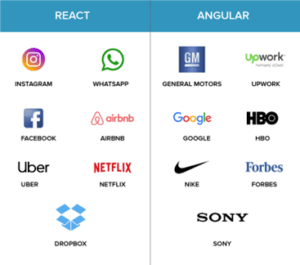 And on the topic of frontend: have you heard about the latest news in CSS?

Although the purposes of React and Angular are different, they are frequently used for the same (or very similar) type of projects, like building a responsive app. Of course, there are benefits in using either of them, and some unavoidable trade-offs. Finding it difficult to choose? Check this React vs. Angular side-by-side comparison.

Performance in React and Angular is more or less quantified in terms of DOMs. DOMs are Document Object Models, which can be real or virtual. React uses virtual DOMs, meaning it does not need to update all the HTML, and only the differences between the new and the old HTML. Angular uses real DOMs and thus it updates the entire HTML. In practice, it means that React apps load faster than Angular apps.

But performance isn’t all about technology, sometimes it’s about methodologies and frameworks, i.e. being Agile. Check our comparison Scrum vs Kanban.

As we’ve seen, Angular uses TypeScript and React uses JavaScript. Although both of these are extremely similar, Angular has a specific structure in terms of using TypeScript and is also a framework on itself that needs to be learned. React is extremely intuitive for developers who already know JavaScript. Overall, the learning curve is much steeper in Angular than in React.

Get to know the key principles of app onboarding for business users.

React is aimed mostly at small to medium-scale web applications. Angular, on the other hand, is much better suited for large-scale applications with various features. Angular is more dependable in terms of scalability than React.

This is a tough one. Both Angular and React are user-friendly, however, if we need to compare the two, one will be “friendlier.” In this case, due to the steep learning curve of Angular, together with the faster React documentation and with the fact that Angular is a full-fledged framework, we’d say React wins in terms of ease of use, compared to Angular.

While you can develop a great UI with Angular, React is UI developer deluxe. So, this is an easy one: React is more suited for UI development than Angular. Wait… are you wondering about dApp development? You’ll be happy to know that both React and Angular allow you to build dApps – or decentralized app development – the kind that gets your business on the next generation of the internet, Web 3.0.

In terms of community support, while you’d think React would have a larger community support system since it is a JavaScript library and much older than Angular, the truth is the community support around Angular is much larger and dependable than the one around React, which consists mainly of the Facebook developers community.

Being a complete framework, Angular provides complete testing and debugging with a single tool. React, on the other hand, relies on a set of distinct tools to perform different tests. Angular is better for testing, debugging, and at handling errors than React.

Psst: take a look at 5 cybersecurity threats you may not be aware of.

In the same line of testing and debugging, Angular is more self-sufficient than React. This is because its complete framework eliminates the need for additional libraries, as it comes with much more functionality out-of-the-box, while React requires additional libraries.

And, of course, the downside of a full framework like Angular compared to a library like React, is that it offers a limited amount of flexibility. React, on the other hand, gives you much more freedom to choose the right tools, libraries, and even architecture for developing an app. In sum, React is more flexible than Angular.

React vs. Angular: the verdict

The question that brought you here is probably “which one to choose?.” While we can’t fully answer without understanding your specific project, we can give you a quick summary of the categories in which one is a “winner.” 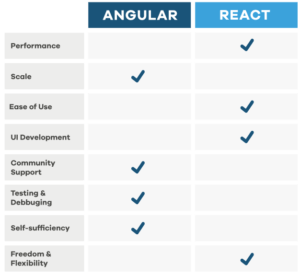 But in the end, the decision of React vs. Angular comes to establishing priorities. Do you prioritise flexibility over completeness? Performance over scale? Ease of use over error handling? You also need to understand what the goals of your choice are. Do you need a large, feature-rich application? Or do you need it to be fast and lightweight?

Admittedly, deciding which technology to use for a project involves multiple factors, including analysing the nature of the project, having a solid business plan, and being knowledgeable of the technologies. Luckily, while you bring the project to the table, we can put in the expertise.

If you need help from frontend developers, be it to build a whole project from scratch, or an extended team to assist your in-house team, don’t look further. Our growing team loves a good challenge because, after all, that is how we become better developers.

Let us know about your ideas, and we’ll brainstorm together to find the perfect solution for your and your business’ needs.

See which of our Nearshore Solutions fits your company, or just drop us a line if you are unsure about your business’ specific development needs. Get in touch with Near Partner and get your website or app up and running.

I am passionate about creating accessible and user-centered frontends for everyone. As a front-end developer I enjoy continuous learning, diving into new technologies and bringing responsive designs to life.

CSS latest version: what to look for in 2022