What is an OutSystems developer?

OutSystems changed the game, and developers had to step up.
But what is an OutSystems developer? We have answers.

Phew, these are loaded questions. Fortunately, Near Partner has quite a few OutSystems developers, and we have answers. 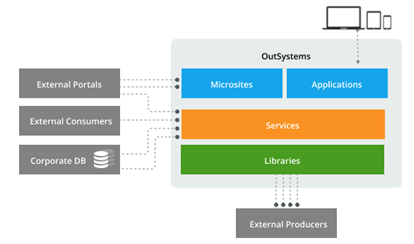 How OutSystems is positioned in an enterprise ecosystem. Source: OutSystems.com.

The mindset of an OutSystems developer is one of their most important assets. It is a ‘must’ to have an “outside-the-box” approach to development-cheesy, but true.

Check the differences between traditional and lowcode development.

To thrive in such a complex yet flexible environment such as OutSystems, a developer need to be: a) solutions-oriented and b) a problem-solver. Finding solutions and solving problems requires creativity and quite a great deal of abstraction.

In short, if you ask an OutSystems developer what their job is, the answer will most likely be “To deliver (functional) solutions to my client”. Which is easier said than done.

An OutSystems developer is someone who can and will use and explore several tools to achieve a desired outcome instead of focusing on the path to get there. Some would call them rule-breakers. We call them people who get things done.

The skills and technologies that make an OutSystems developer

Now, you must be thinking “A required skill for an OutSystems developer is… OutSystems”. And you are not wrong, but not totally right either.

There’s more to OutSystems than meets the eye. Let us guide you through the technical and non-technical skills required of an OutSystems developer to succeed.

This is the skill set of an OutSystems developer:

Just like any developer, an OutSystems developer must have web development as a skill. Wait, isn’t OutSystems lowcode? Well, yes. But also built on .Net. Meaning that what allows the platform to be lowcode for the business user is, exactly, a lot of code. Traditionally, OutSystems developers are fluent in C# or Java, as well as Python, and/or .Net.

SQL, short for Structured Query Language, is the language used to communicate with relational databases, structured data. Mastery of SQL is an important requirement for any OutSystems developer worth his salt.

While not everything is mobile, mobile development is essential nowadays, and it has its particular set of considerations. Because of this, it is extremely important a developer has these skills, especially in OutSystems development.

And because any developer is more than a set of technical skills, there is also a requirement for some particular soft skills for an OutSystems developer. One of the most important is flexibility, as well as responsiveness, in changing priorities and concurrent responsibilities. The ability to collaborate with others in a team setting is key to contributing to a successful delivery of large products or projects. Finally, communication-or the ability to communicate clearly and unimpeded with both teammates and other departments-is highly important. See how synchronous and asynchronous communication are key for faster development.

Since OutSystems is an enterprise-grade lowcode platform, it is very useful for an OutSystems developer to be acquainted with the most common business processes and needs. For example, experience with building proofs of concept is a highly appreciated plus, as well as experience with participation in full lifecycle development.

The relationship between OutSystems and Agile is quite obvious. If the concept of Agile is somewhat foreign, look at what it means to us. Agile values working software over extensive documentation, collaboration over contract negotiation, and responsiveness to change over plans set in stone. And these could very well be the pillars of OutSystems. It’s practically impossible to separate the two, since both lead to faster development, higher engagement, and more visual models. So, yes, OutSystems developers are Agile.

More: check what are the most attractive skills in a Software Engineer according to CIOs!

One thing that makes OutSystems so appealing to developers is that the environment is constantly evolving. This skill set forces developers to evolve too, in their mindset, skill set, and work method. The requirements of an OutSystems developer grow and increase in complexity. Be it because the software or the processes change, or because the business needs shift, making use of the good old adage, the only constant is change.

In fact, that is one reason OutSystems has such a large and active community of aspiring and established OutSystems developers, Tech Leads, MVPs and Champions (we have our very own OutSystems Champion, meet André)!

Need help with your next OutSystems project? Let’s talk about our OutSystems services! At Near Partner, we’re a cohesive team of developers with several areas of expertise, and we’re ready to collaborate with you and get the best solutions for your business. Still unsure about what route to take? Sceptical about lowcode and how it can help your business? Let’s brainstorm and jumpstart your business together: get in touch!

How expensive is tech debt?