Despite much confusion, low-code and no-code are different things.
So which is the best for you: low-code or no-code?

Hinting by the names, low-code is not the same as no-code (aka zero-code). In theory, the difference seems to be only in the amount of coding, right? But there is more than meets the eye, literally.

Low-code is a visual software development approach that requires minimal coding in order to build applications and other software.

Instead of using complex programming languages, most low-code platforms rely on intuitive drag-and-drop interfaces targeted at both qualified software developers and citizen developers alike. Ever heard of Outsystems?

Low-code serves a range of different needs, from simple apps for automation or to improve workflow, to more complex apps and tools that ultimately become mission critical for business processes. Learn how enterprise-grade low code can reduce time-to-market.

The major benefits of low-code are speed, agility and collaboration. Low-code platforms allow for scalable architectures, open APIs for reusability, cloud development and on-premises deployment.
So why do so many choose low-code? Because it allows for developers to take control over every aspect of an app – from quality testing to UX/UI. It also streamlines collaboration between IT and business users.

Learn more about what you can build with low-code platforms.

No-code is also a visual software development approach. But unlike low-code, it requires zero coding. Who uses no-code? Mostly departments within an organisation that need simple, stand-alone apps to improve workflow. For example, it is useful if a business needs an app to serve specific department needs, but does not have an IT team or the existing team can’t really devote themselves to it. No-code platforms offer a user-friendly interface with drag-and-drop capabilities and pre-built templates. Its primary advantage is that it allows for the fast creation of apps and tools without a single line of code.

With no-code platforms, it is possible to build Business Intelligence reporting and dashboards, automate business process, and create data management applications, as well as migrate data from legacy systems. A very simple example of an application that can be created with no-code is a tool for automated invoicing.

However, the downsides of no-code become more important as the company grows. No-code can lead to shadow IT, which can compromise security, compliance, integration, lead to resource depletion, and increase technical debt. And crucially, no-code’s simplicity can also be its downfall. Pre-built models and templates are great at the start of development, but its rigidity soon caps the possibility of scalability and customization.

Low-code vs. no-code: what are the differences?

Basically, no-code can be seen as a subset of low-code. Meaning, low-code offers some no-code tools and functionalities, but the opposite is not true. Do you know what to look for in an app development software? Let’s look at a summarized comparison low-code vs no-code: 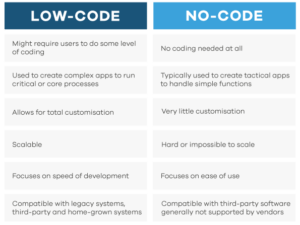 In short, both low-code and no-code allow businesses to create applications with greater efficiency, increasing productivity. However, the two have different purposes. Therefore, there isn’t a direct answer to the initial question (“Which is best?”) when it comes to low-code vs no-code.

Low-code is the better choice for developing mobile and web apps and portals that require integration with other systems and several data sources. For simple applications that don’t really require customization, no-code is the better option.

Low-code, admittedly, is not as simple as no-code. To make the most out of a low-code platform, you will need some intervention by a developer at some point. However, there is still enough simplicity in low-code tools to get apps up and running much faster than via traditional, hand-coded, development.

And, since low-code still requires some knowledge of coding, security risks or compliance issues aren’t as common as with no-code, as trained developers are up to par.

What will your choice be?

Although the differences and similarities are laid out above, it can still be difficult to choose between low-code vs. no-code.

Does your organisation not have a dedicated IT department but would still need a customizable and scalable app? Or is your IT team completely swamped and unable to assist other departments with a low-code solution? We can help you assess your company’s needs. Check what an extended team is and why you might need one.

Do you need a simple yet effective no-code platform to automate complex tasks and processes? We can also advise you on how to proceed. If you’re just starting a business and are unsure of what your needs will be, great news: we love kick-starting a new project!

Get in touch with Near Partner and let’s get your business up and running at its potential. Meanwhile, check our Project Cost Simulator.

I am on that never-ending journey of trying to improve myself, whether that may be physically, mentally, or socially. There's always room to improve and to learn. This includes, of course, tech and IT development. It's all about making things easier for us and for those around us.

What is technical debt and how to reduce it?